The war in the east of Ukraine sees not only government forces and rebels clashing, but also two armies around the world facing each other on social networks. Possibly it’s the first time an ethno-political conflict unleashes cheer on the web like in a stadium. It has nothing to do with news. While two deaf propaganda clash, the truth sinks deeper and deeper. 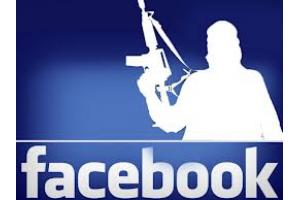 A graphic picture is bouncing from Twitter to Facebook: a young woman hit by a mortar shell near Donetsk. She is reversed in the blood, still holding her little daughter in the arms. It happened in a European city in 2014. It may seem unbelievable but true. It is a heinous crime, that should be avoided to happen again. We should try to identify those responsible and bring them before the international tribunal in The Hague. But that picture – along with others – has become a sort of macabre flag for two fans who are blaming each other for the same crime. It spreads on Facebook pro-Maidan groups, as evidence of the atrocities committed by separatists in the Donbass, and on the pages of the various pro-Russian supporting groups for, who accuse Kiev army of shelling civilians. There is no evidence, there is no reliable source, there are only slogans that contribute even more to hide the truth with a smokescreen of hate-filled comments. And the victims end up on the background.

The infowar that characterizes the Ukrainian crisis since the very beginning had already reached a degree of perfection during the Russian storming of Crimea. The Moscow led (dis)information machine oiled along the way. The Kremlin has put together not only a fleet of traditional media – including the flaghship RT all-news broadcasting around the world in English, Arabic and Spanish – but also an army of social network users that overwhelm Western media with comments. According to many they are mostly trolls, i.e. fake profiles, behind which are people paid to stir things up. After a few months of operation, the one-sided propaganda catered by Russian media has obtained at least two effects, both negative: first, to cause a symmetrical response by Ukrainian media and online support groups; second, to export a bias that forgets to pursue the truth.

Relating to the first effect, the response of the pro-Maidan press and public opinion could not be worse. We have already seen it in June, at the time of aerial bombardment of Lugansk, that was immediately by Ukrainians attributed to separatist with the same conspiracy technique implemented by Russia after the downing of MH17. We are seeing it these days, while Grad rockets hit residential areas in Lugansk and Donetsk, both sides accuse one another while Human Rights Watch points the finger on Kiev.

The battle on social networks

The polarization of information about the war in Donbass has taken root not only in Ukraine and Russia. In Italy, for instance, Facebook is full of groups supporting one or the other party. The mechanism could not be more distorted. The political orientation according to the Italian parliamentary bow is lowered into the Ukrainian reality, which has nothing to do with it. Neo-fascists and right-wing extremists hail the deeds of the battalion Azov (born from paramilitary formations of EuroMaidan and now fights against the separatists in the Donbass); Communists and leftish sympathizers who see in the self-proclaimed republics of the Novorossija a Marxist-Leninist Eden. And spew hatred against each other.

But even among those not belonging to extremist political groups the words escalation echoes the conflict escalation. Various threats and a flood of insults to any different opinion guarantee the information short circuit.

It happens. Nicolai Lilin‘s Facebook profile with more than 70 thousand like it has become a catalyst for one-way information. A forum in which the participants do not seem to see other truth but the “Russian version”: the dead of Donetsk and Lugansk are victims of the “Kiev junta coup murderers with the complicity of the U.S. and Europe,” the author of the bestseller “Siberian Education” writes.

But the same thing happens, equal and opposite, on the various Italy-Ukraine Facebook groups, where separatists are “terrorists who are mass murdering the local population with the support of […] Nicolai Lilin.” Incidentally, Lilin has sued for libel one of the group’s administrators.

The paradox of this meat grinder of experts with a ready-to-use truth is that balanced and non-partisan information ends up becoming biased anyway. An article I wrote a couple of weeks ago received vehement comments by one side for being too moderate and for being biased by the other.

The result of this tragicomedy of information? The truth is now just a worthless background behind yelled slogans and waved pictures of the dead. Sadly, the victims die twice.