The suffered Caucasus’ march toward the peace

The conflict in Nagorno Karabakh started thirty-two years ago. It is time to create indispensable premises for the future of a trustworthy peace 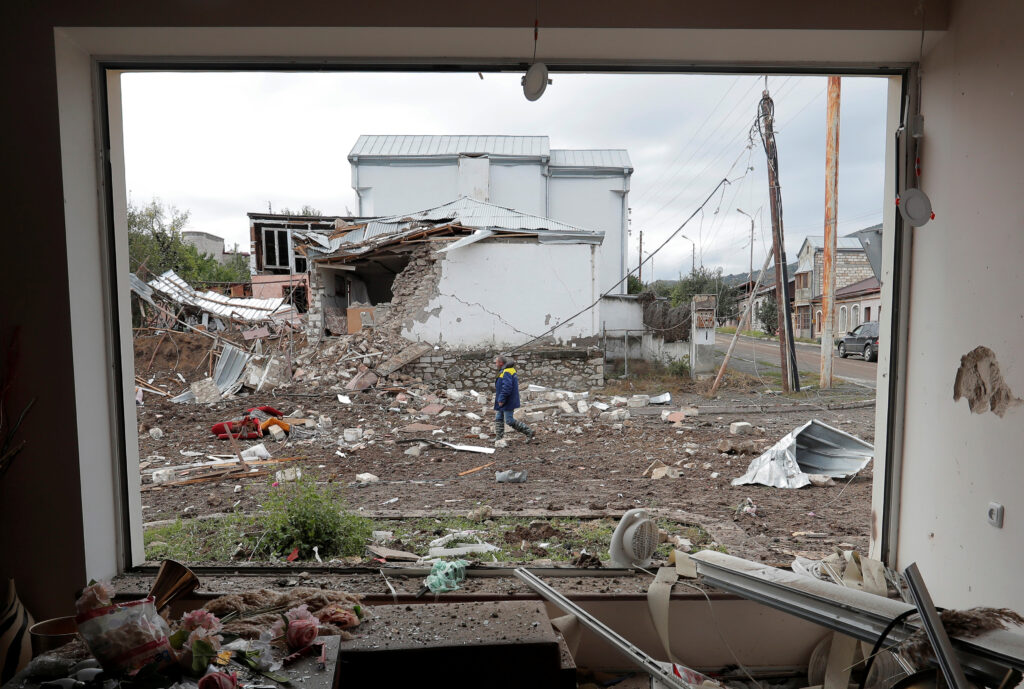 A man walks past a house damaged by recent shelling during the military conflict over the breakaway region of Nagorno Karabakh, in Stepanakert October 8, 2020. REUTERS/Stringer

It takes true courage to respond to your country’s appeal to take up the arms, leave commodity of your own home and go fighting for liberation in the midst of mud and cold. But it takes an immense wisdom to leave aside those very same arms, preventing civil casualties and terror, and go siting at the table of negotiations with your adversaries no matter how unreachable the consensus may seem.

On September 27th the failed attempt of the OSCE Minsk Group to establish the peace re-emerged to the surface of international news, exploiting the negligence of the international community engaged in coping with unprecedented consequences of global coronavirus emergency and focused on the upcoming U.S. presidential elections. But the international community is not the only one to blame for developments in the faraway Nagorno Karabakh, the responsibility also belongs (or at least should belong) to respective governments in conflict which have continually failed to reconcile conflicting perceptions of what the peace should entail. And that unattainable peace itself seems to be lost somewhere in between strategic economy-projecting of South Caucasus Pipeline, (dis)information war and legacy of unrewarded genocide which profoundly shaped geopolitical equilibrium and partnerships in the Caucasus region.

It is a fact that Nagorno Karabakh is internationally recognized as part of the Republic of Azerbaijan as it is true that majority of its population is ethnic Armenians. In 1994, following dissolution of the Soviet regime which bears the initial responsibility for unresolved conflict and geography of uncertainty, the fire ceased only to be resumed in 2012 and then again in 2016 with the Four-day April war, leaving hundreds dead. In July 2020, following cross-border clashes between Armenian and Azeri forces in the Tavush area of Armenia and Ağdam in Tovuz District of Azerbaijan, thousands marched in Baku to protest attacks of Armenian armed forces on Azerbaijani troops and asking the government to regain control over Nagorno Karabakh. On the other side, Armenians perceived these events as a result of longevous anti-Armenian propaganda cultivated by the President Aliyev, aimed at welding his political capital through a “short victorious war”. What one sides defines as illegal occupation, the other one calls the liberation and anti-aggression struggle.

The role of Turkey and Russia

The most recent escalation, which severely threatens to become a full-scale conflict, is marked by a decisive presence of two international powers: Turkey and Russia. Over the past few days, President Erdogan’s regime, under the principle of “two states, one nation”, declared its unwavering support to Azerbaijan. Many international leaders and analysts have voiced their concerns over Turkey’s “warlike” rhetoric and alleged deployment of heavy weaponry and mercenaries to Azerbaijan, urging the sides to return to peaceful negotiations under the Minsk Process. On the other hand, Russia, as one of the co-chairs of the Minsk Group and declared ally of both parties, is more prone to mediate instead of entering in another conflict scenario, especially given the developments in Ukraine and Belarus.

Yet, given the fact that recent clashes have not only taken place on the territory of Nagorno Karabakh but in Armenia as well, the question remains whether and for how long Russia will be able to postpone enactment of the mutual defence pact with Armenia which obliges both countries to intervene if the other was to suffer an attack on its borders. Moreover, for how long Russia will tolerate Turkey’s interference in its historical sphere of interest, especially having backed opposite sides in Syria and Libya conflicts already, and for how long the EU will be able to hold breath as the on-going developments put into question the transportation of natural gas to its market.

The role of the international community

It has been said long ago that the war is nothing but “the continuation of politics by other means” but the world seemed to have come to its senses after two disastrous world wars, realising that the costs of battlefield-tailored politics are too elevated and have preferred establishing other means of conflict resolution. So the UN, OSCE, NATO and other international organisations-led peacebuilding and peacekeeping missions had their prologue, resulting in various peace armistices and peace treaties across the world.

But there is a great difference between the frozen conflict and peace, between the consensus built around the interests of a particular momentum and programming of long-term geostrategic moves. None of the extremes really takes into account the popular sentiment (which, deciding upon promises embedded in electoral and revolutionary programmes, gives the legitimacy to the system) but rather opts for a short-term victories, thus postponing the taking of responsibility for inadequate foreign policy responses.

The conflict in Nagorno Karabakh started thirty-two years ago. So many generations of Armenians and Azeris were born and grew up surrounded by the reality of peace standing of the feet of clay. In the context of such a fragile peace, which profoundly relies on political rather than on popular will and interest, those very same youngsters have been fed with conflicting perceptions of each other instead of being the healing force in the region. This is why, more than ever, it is an imperative for the international community to move from delivering speeches to proposing and enacting consolidated and effective solutions. It is high time for all involved parties to stop exploring who made the first-strike and to take the high road aimed at creating indispensable premises for the future of a trustworthy peace.